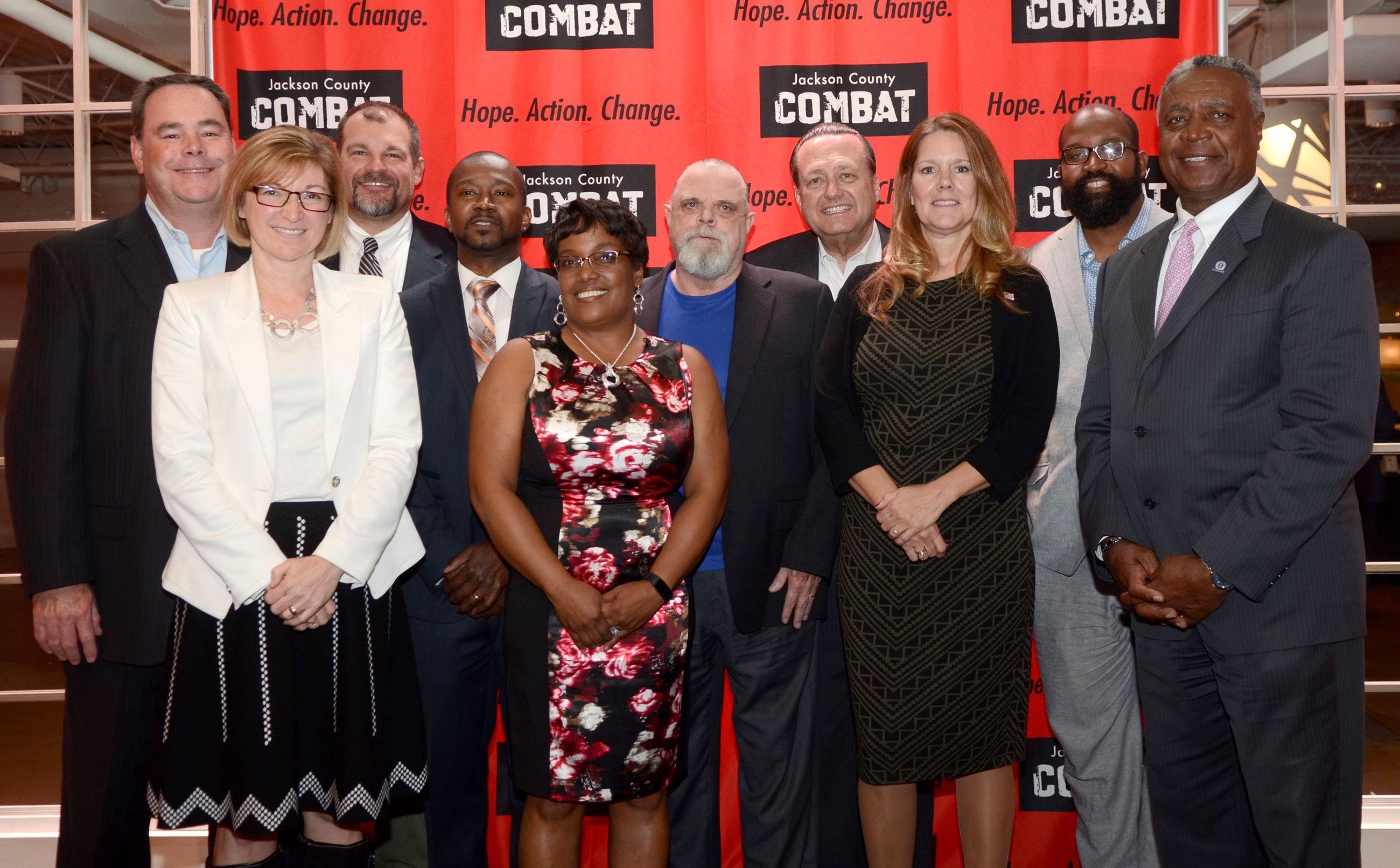 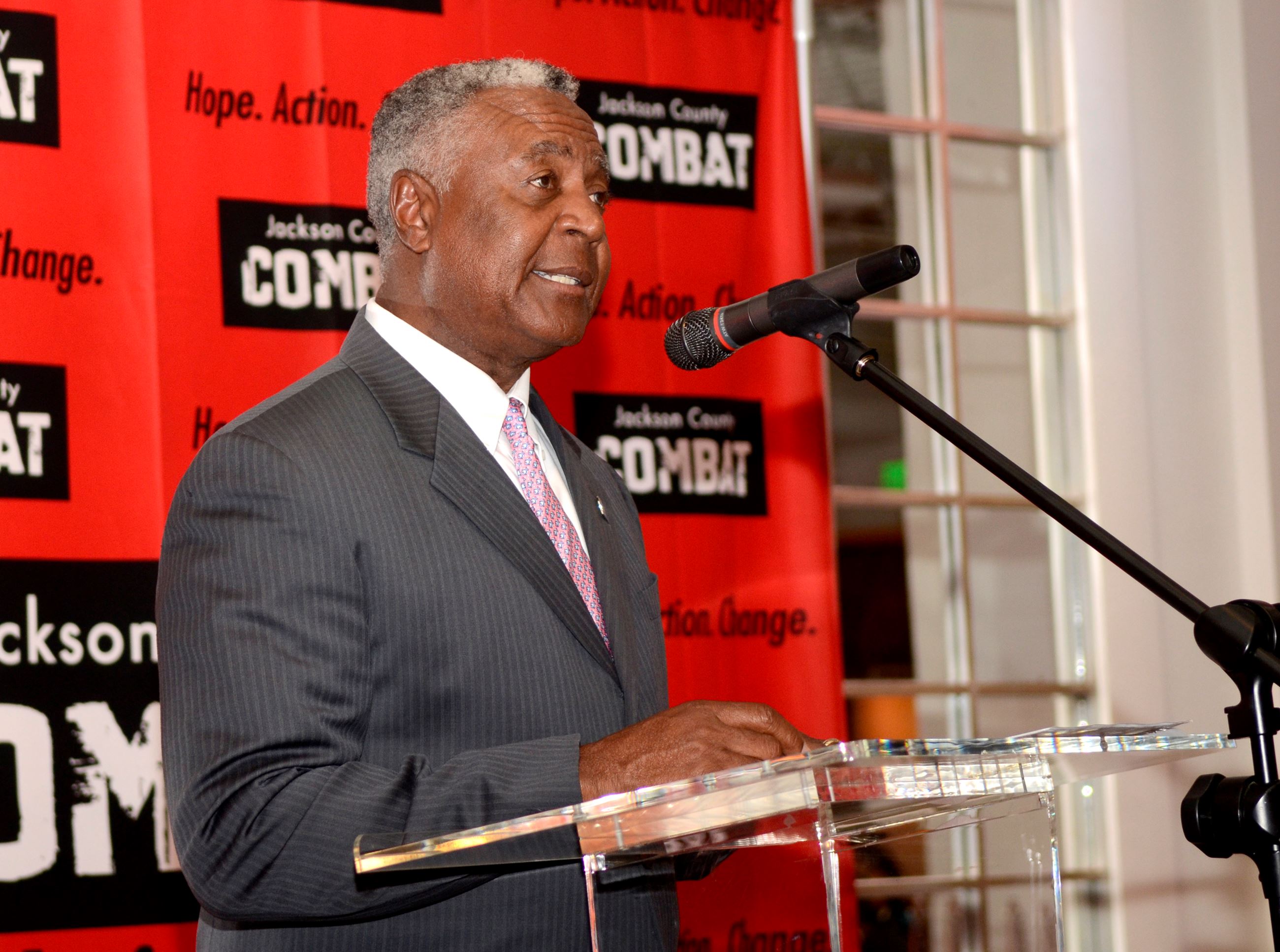 Jackson County COMBAT and its numerous partner agencies gathered to celebrate COMBAT heroes that are creating HOPE by taking ACTION to make a CHANGE in our community.

“We’ve come together tonight to celebrate and recognize outstanding community advocates who help COMBAT make a meaningful difference throughout Jackson County,” said White. “For nearly 30 years, COMBAT has prided itself on saving lives and creating healthy environments for our children, adults and seniors.”

For the first time, the award’s ceremony was accompanied by a dinner and a keynote speaker, Kansas City Royals Alum Willie Aikens. He shared his journey of addiction and recovery and how it has impacted his life. 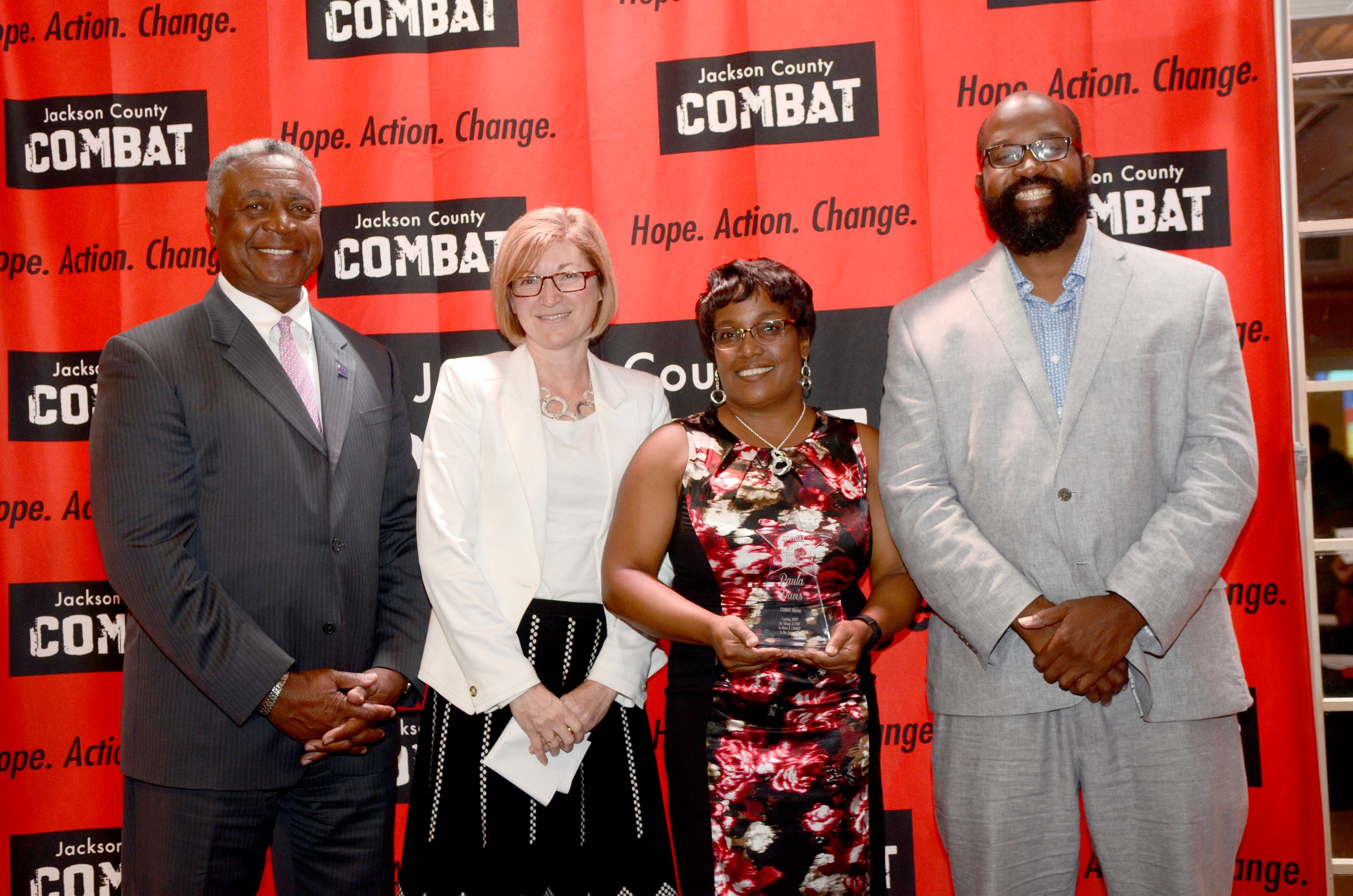 Paula has long been a part of the COMBAT family and embraces the vision of a resilient community.  Early on, Paula worked as a Program Monitor in the COMBAT office for two years. From there, she joined the ArtsTech team where she directly began to benefit the youth in the community.

Paula’s knowledge of prevention programing and services is exceptional. Her experience in the field has made her an asset, not only to the ArtsTech organization, but to the many prevention and treatment agencies she has collaborated with over the years.

Before Paula was appointed as the Organizational Operations Manager at ArtsTech, she was the Program Director for 11 years. Over the years she has worn many hats at ArtsTech including managing more than 50 youth interns and their COMBAT grant programing staff, grant reviewer, assistant in web page development and events coordinator.
For those of us who know Paula personally, we know she keeps busy outside of her responsibilities at ArtsTech. Paula has served on the COMBAT Picnic Committee for the last 14 years and continues to assist and recruit volunteers for COMBAT Neighborhood Cleanups. She currently serves as the President of the Northwest Missouri State University Alumni Association Board and is a member of the NWMS Alumni – Kansas City Chapter, as well as the NWMS Black Alumni Chapter.  These are just a few examples of the many organizations, clubs, networks and churches where Paula contributes her talents and skills. She is truly one of a kind and that's why she is COMBAT's Prevention Change Maker. 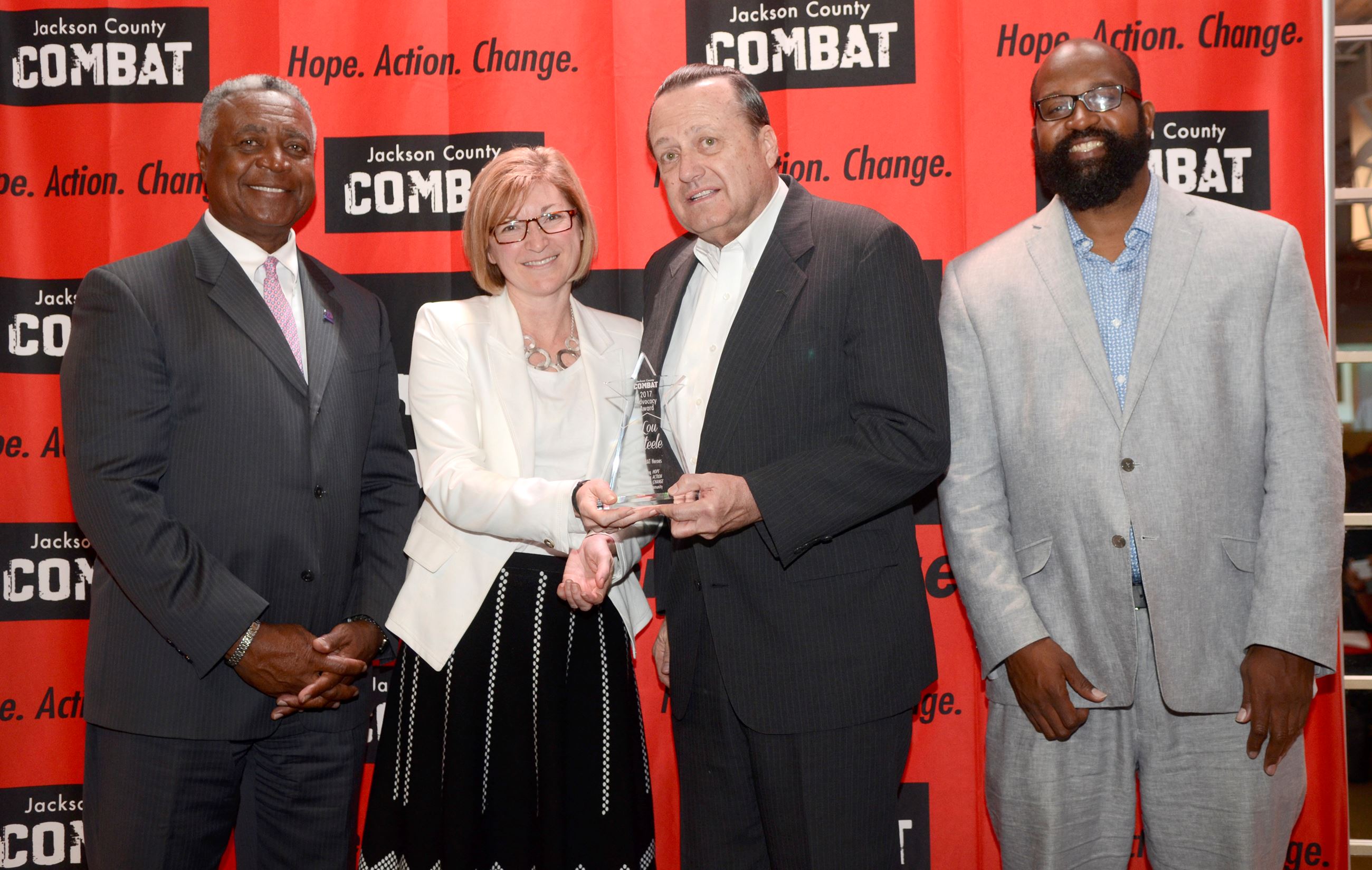 Addiction, like any disease, does not discriminate. Substance abuse and addiction does not have a face, but too often society stigmatizes those individuals who are suffering from addiction.

Lou is a very successful businessman with a very beautiful family. Most people would not perceive Lou as a parent of a heroin addict. He will say that he, like many, felt embarrassed that his daughter had become addicted to heroin. Lou remembers how devastating it was to learn of his daughter’s addiction.

Lou’s journey with his daughter has given him and his family an opportunity and a voice to remove the stigma from substance use disorder. Lou’s daughter has since become a counselor and is a director at a large treatment center in California. Because of that relationship, Lou has reached out to their organization about the possibility of bringing a “branch” here to Kansas City. He is also interested in creating something like a fitness facility where people in recovery can go and be with others who are trying to have a full life without addiction.

As a committed advocate, Lou works with local organizations and attends meetings and seminars in his effort to help end the opioid crisis our country is facing. He is interested in creating sustainable solutions that do not depend on government funding. Lou is willing to take any path necessary to get help and assistance for those who are suffering from addiction. 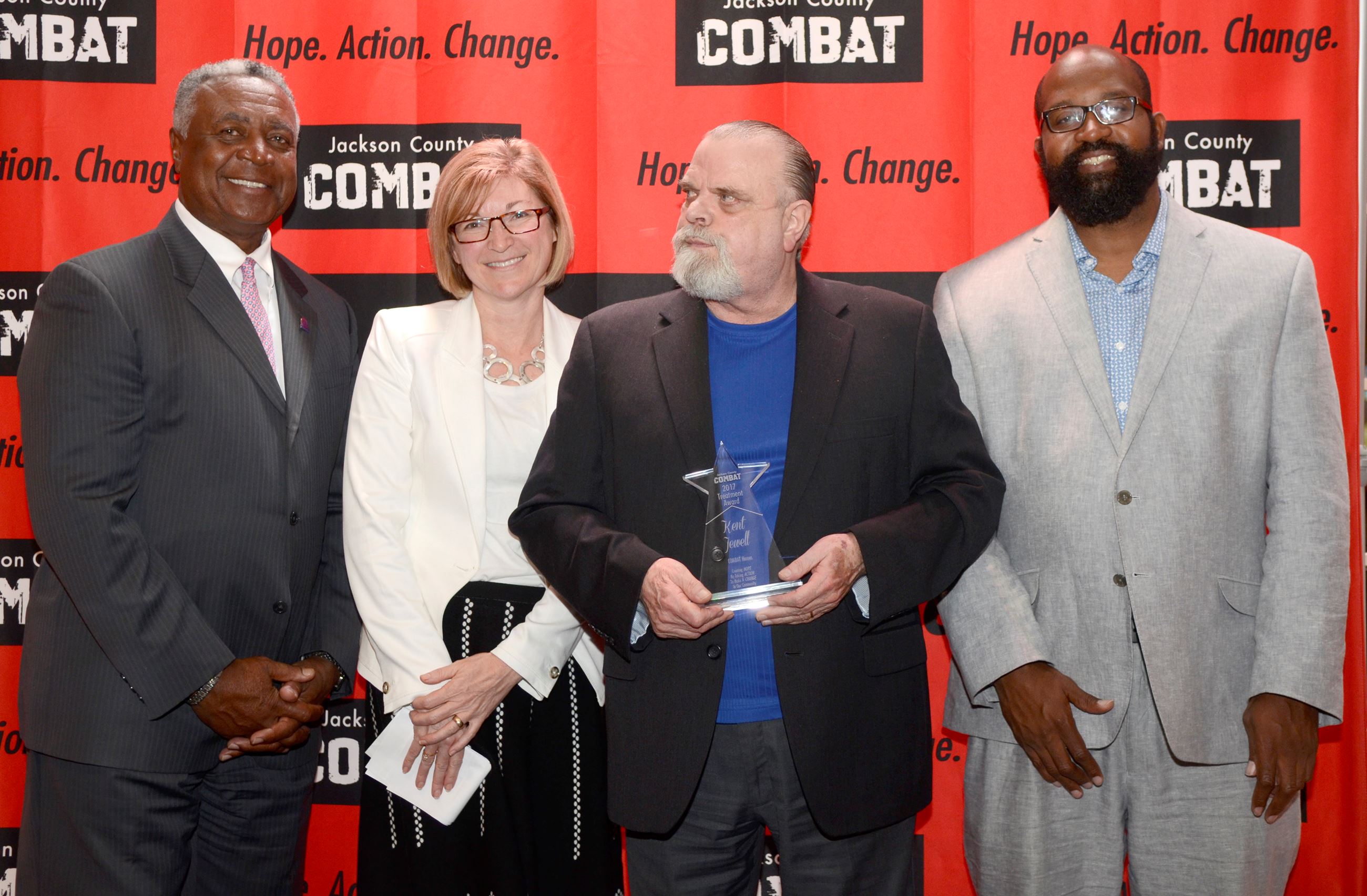 Kent, like many of the agency directors that partner with COMBAT, is in long-term recovery. Kent came to Benilde Hall as a client seeking treatment in 2001. After successfully completing his treatment program, Kent went on to pursue his Associates of Arts Degree in Addiction Counseling in 2002 from the Kansa City Kansas Community College. In May of 2004, Kent graduated from University of Saint Mary with a Bachelor of Arts in Psychology and became the Executive Director and CEO of Benilde Hall in August 2006. By May 2008, Kent graduated with his Masters in Counseling Psychology.

Since his tenure at Benilde Hall, Kent has served a diverse group of men whom he remains devoted to. Kent supports a robust veteran’s program and offers transitional housing for homeless clients. He partners with Jackson County Drug Court and will always make sure there is a bed if they have a client in need.

In 2006, Kent instituted the Matt Talbot building, a permanent housing complex for men who successfully complete the Benilde Hall Program. The men of Matt Talbot continue with aftercare treatment while becoming mentors and role models within the Benilde Hall community.

When Kent has a client who becomes successful in recovery, he encourages them in all ways. Kent has created small businesses such as lawn care, painting and handyman services to create employment opportunities for the clients. Just recently, they started raising chickens for both therapy and eggs.

Kent and his clients at Benilde Hall have volunteered their grilling and food preparation services at nearly every COMBAT event over the last few years. They are always serving and that is reflective of their leadership.

You can find Kent at Benilde Hall every day. He is tireless. Kent is the best type of partner for COMBAT and well deserving of this honor. 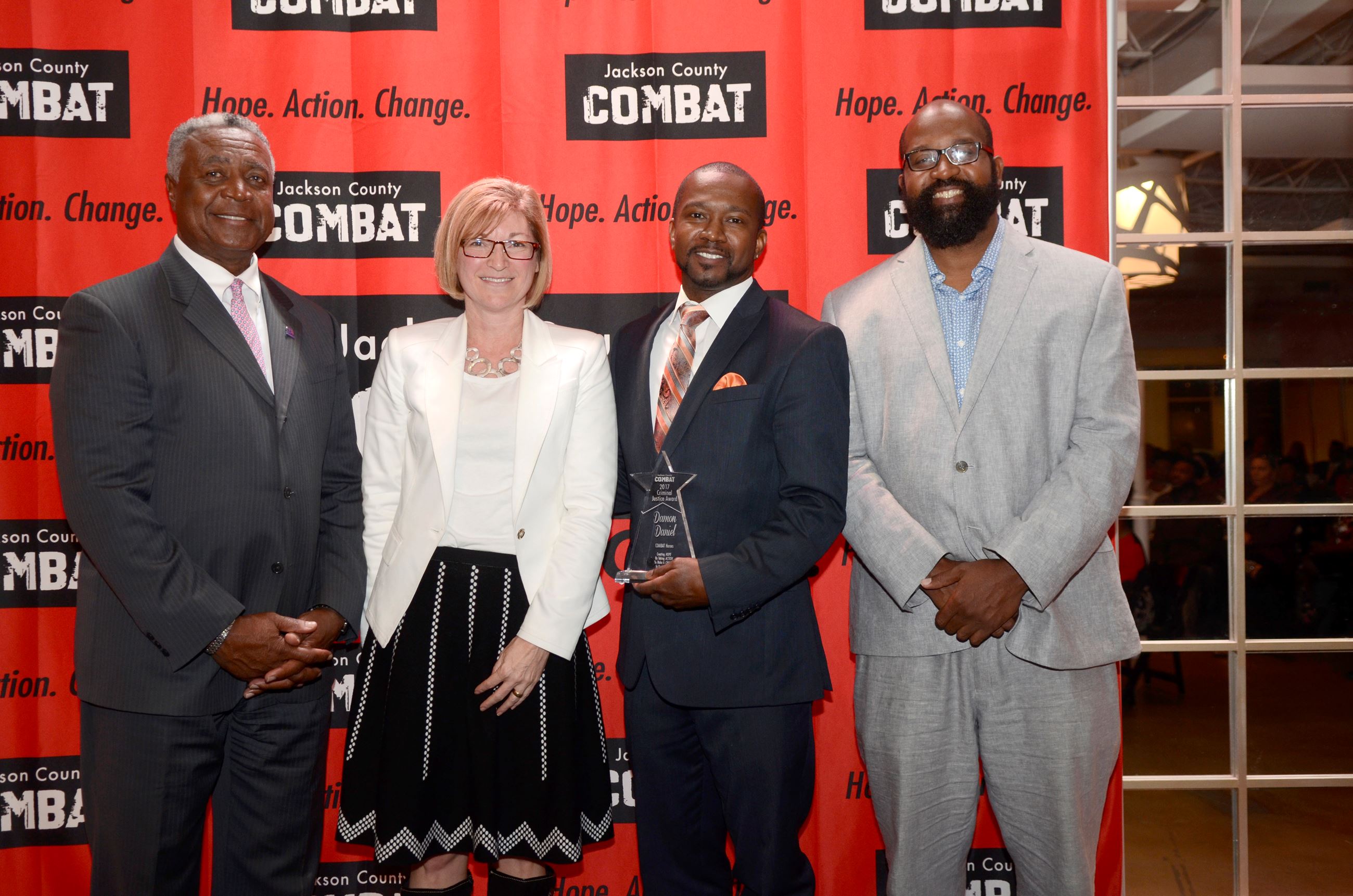 Damon Daniel answered the call to join AdHoc Group Against Crime on Monday, February 23, 2015. Damon is a native of Kansas City, Missouri and brings with him a wide range of experience within the field of social justice that spans 20 years.

His work background ranges from promoting bullying prevention programs in schools, to directing the community organizing efforts of one of Kansas City's most effective grassroots leadership development and community organizing entities in the region. Over the last 8 years, Damon galvanized faith communities to address socioeconomic issues, particularly those that perpetuate the dehumanization of people of color.

Through his work with elected officials, neighborhood leaders, and community groups, employment opportunities for returning citizens in Kansas City, Kansas and Missouri have increased and concrete programs have been developed in target neighborhoods to reduce violence and stabilize neighborhoods.

Damon served as the lead convener of a multi-sectored, racial and generational network of stakeholders called KC Regional Equity Network. His leadership empowered the unified vision and voices of regional organizing efforts, to work collaboratively to achieve policies that promote equity and inclusive prosperity in Kansas City metropolitan area. Damon is a graduate of the University of Missouri-Kansas City with a degree in Urban Affairs, with an emphasis in community and social services and non-profit management.