Neither the Jackson County Prosecutor’s Office nor current COMBAT management ever questioned the validity, accuracy, professionalism or integrity of BKD. We support the work BKD has done in compiling this report. We are eager to begin implementing BKD’s many recommendations as promptly as possible and are hopeful all in county government will help us in taking these crucial steps to better serve the people of Jackson County. – Jackson County Prosecutor Jean Peters Baker & COMBAT Director Vince Ortega

» DOWNLOAD BKD Letter (PDF) stating report “will not be retracted or supplemented, and can be relied upon by its intended users.”

The letter is addressed to both COMBAT Director Vince Ortega and the County Legislature’s Finance & Audit Committee, citing the name of former Legislature Dennis Waits, who still served on the Committee last December when BKD was engaged by the county to begin working on this report.

Today, Baker’s office is releasing the audit results. BKD, a Kansas City CPA firm, found a number of concerning financial issues from the time before the Prosecutor’s Office assumed oversight of COMBAT. Among the financial concerns highlighted in the BKD audit:

“It’s clear, and it’s disturbing, that COMBAT revenues were too often spent on purposes that are not in alignment with the mission of COMBAT,” said Prosecutor Baker. “We need to go back to those days when COMBAT’s mission was focused by (Prosecutors) Riederer and McCaskill to support innovative programming that tackled crime and improved neighborhoods.”

“Most of the time, COMBAT’s management was not told about how the anti-crime tax dollars were being spent,” she added. “That will change.”

Baker has asked the county Legislature to conduct hearings that will track progress on implementing BKD’s recommendations.

A few recommendations are in line with steps COMBAT has already begun taking prior to BKD’s report. COMBAT is currently seeking to hire its own financial professional, rather than relying on the county Finance Department. It’s also hiring three program monitors to conduct on-site visits at agencies receiving COMBAT funding.

BKD also recommended that COMBAT’s funding formula, last approved by the Legislature in 1995, be updated. All agencies receiving COMBAT funds based on that formula should be required to detail how the money will be spent, BKD recommended.

Baker said she would have liked to have had these audit results as soon as the Legislature moved COMBAT under her direction. But legal challenges from the County Executive’s Office made that impossible. It’s unclear how much was spent by the County Executive on these legal challenges, but the Jackson County Prosecutor’s Office estimates upward of $200,000 was spent on legal fees related to the Executive’s challenges.

BKD began its forensic audit this spring. It looked at four years, 2014 to 2018. The Missouri State Auditor's Office, in addition, is currently conducting an audit of COMBAT.

In 1989, voters approved COMBAT, which operates on revenues from a quarter-cent sales tax in Jackson County. In 2009, voters expanded COMBAT’s initial anti-drug mandate to include violence prevention. COMBAT was last renewed in November 2016. In 2018, voters approved moving oversight of COMBAT from the County Executive’s Office back to the Prosecutor’s Office.

It was important to the integrity of this report that other county departments were not given the opportunity to scrub, redact or delay this report, as has been practiced in some county departments. You should be reminded that the County Executive's office heavily redacted a consultant's report on the poor conditions at the Jackson County Detention Center and sought to seal documents that supported a grand jury's report on conditions at the jail.

We will review any other specific allegations of any error with our auditors.

"Most of the time, COMBAT’s management was not told about how the anti-crime tax dollars were being spent. That will change." 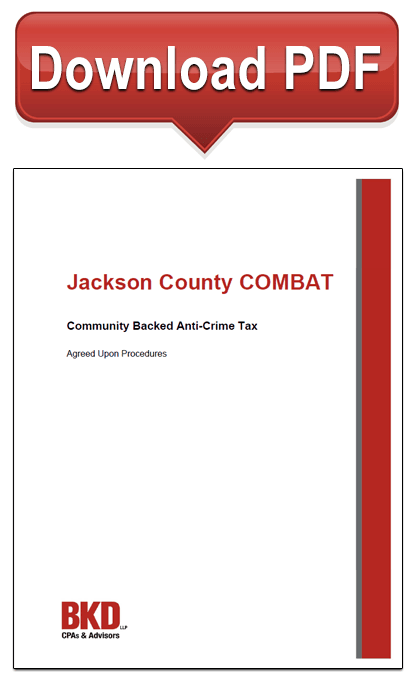