No matter where children grow up or who their friends are, nearly all of them are confronted at some time or another by friends with bad ideas, ways of testing limits, getting in trouble and doing things they'll regret later.

Challenge of Peer Pressure
It's not so hard saying, "No thanks, I have to go now," to a stranger. But it’s a lot tougher when a child's friend - especially one whose approval means a lot to him or her - tries to get that child to do something he or she knows is wrong.

Even good kids occasionally pester their friends into skipping a class or lying about why they were out together so late. But if friends or acquaintances entice your children to try tobacco, alcohol or drugs, the consequences can be more serious.

Role Play
The best way to prepare children to succeed in these encounters is to role play. Practice similar scenarios in advance. With the right words at the tip of their tongue, children can assert their independence while making it clear that they're rejecting their friends' choices and not the friends themselves. 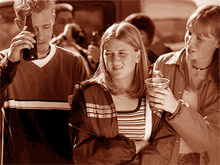