“It is critically important that children feel loved and accepted for who they are.” – Dr. Jason Rafferty, pediatrician and child psychiatrist.

When the COVID-19 pandemic forced most college dorms to close in March of 2020, many LGBTQ+ students found themselves sheltering in place where they might have felt the least welcome to truly be themselves—back home with their families.

The Trevor Project soon experienced a tremendous surge in young people reaching out for help. Operating a 24/7 lifeline and also providing support through live chats as well as text messaging, The Trevor Project is the nation’s largest suicide prevention and crisis intervention organization specifically for LGBTQ+ youth.

“A lot of young people when they make it to college are able, for the first time, really to live their truth,” Dr. Megan Mooney told National Public Radio last year.

» Home But Not Safe, Some LGBTQ Young People Face Rejection From Families In Lockdown -  National Public Radio · May 17, 2020

Mooney, a psychologist, specializes in preventing and treating trauma in LGBTQ+ youth. She called going to college “a lifeline for a lot of LGBTQ+ people” who may have been traumatized in high school—or in their own home. 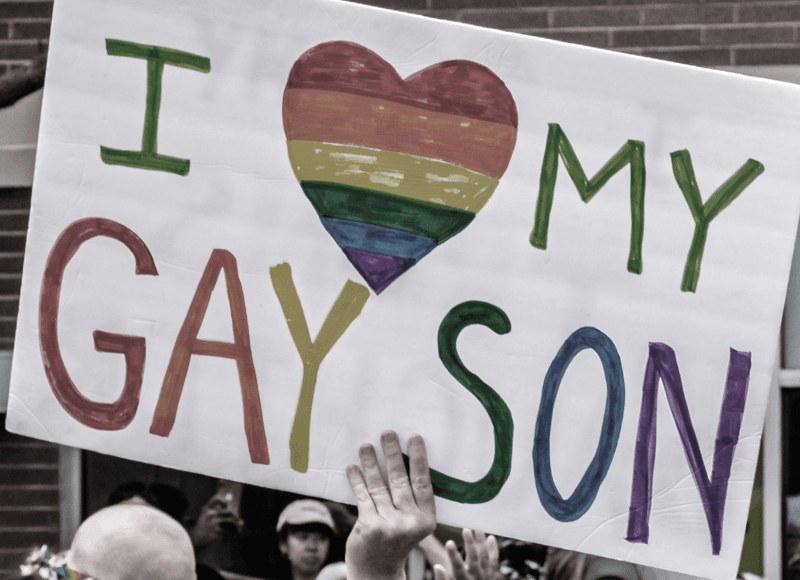 “Because families play such a critical role in child and adolescent development,” the study’s authors wrote, “it is not surprising that adverse, punitive and traumatic reactions from parents and caregivers would have such a negative influence.”

Tragically, many LGBTQ+ youths’ lives are ending before they reach adulthood. Suicide is the second leading cause of death among all teens, and LGBTQ+ youth are “five times more likely than heterosexual kids to attempt suicide,” according to Kirsti Millar, Licensed Professional Counselor with the Lee’s Summit-based nonprofit mental health service provider ReDiscover.

COMBAT funds ReDiscover’s Show-Me Zero Suicide prevention program that provides services to about 400 youths in Jackson County annually—nearly a third of whom self-identify as LGBTQ+.

“It’s not surprising we have a lot of LGBTQ+ kids in Zero Suicide,” Millar, the program’s director, said. “These kids can feel incredibly isolated.” 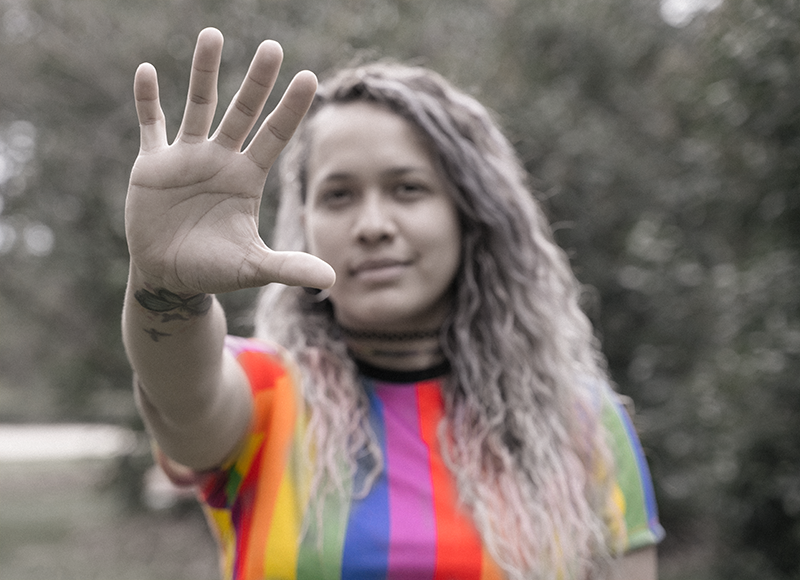 “I think it can be the adults who cause LBGQT+ kids more distress—who are intolerant. Most kids today are a more accepting generation. They tend to be more supportive of each other.”

Of the 35,000 LGBTQ+ young people (ages 13-24) who participated in The Trevor Project’s 2021 National Survey On LGBTQ Youth Mental Health, 42% seriously considered attempting suicide during the past year, including more than half of transgender and nonbinary youth.

Other Key Findings From The Survey

“LBGQT+ kids are more likely to be bullied and ridiculed in our high schools and middle schools,” stated Beth Banker, Director of Clinical Services for the Child Protection Center in Kansas City. “They are especially vulnerable.” (Mooney described to NPR that “the vast majority” of LBGQT+ students are still subjected regularly to “name calling… I don’t even like to repeat because [it’s] so offensive.”)

More schools are doing more to improve conditions for their LGBTQ+ students, Millar believes, though she noted, “Some are still struggling. Part of that can be unintentional like teachers not always using a student’s preferred pronouns. Pronoun use can be really triggering.”

She added, “Some kids do have the double-whammy of not be accepting at school or at home.”

But Millar is encouraged that the attitudes of other youths toward their LBGTQ+ peers are shifting.

“I think it can be the adults who cause LBGQT+ kids more distress—who are intolerant,” she said. “Most kids today are a more accepting generation. They tend to be more supportive of each other.”

Having one supportive person in their lives can make a dramatic difference for any young person.

“Our experience at The Trevor Project shows just one supportive person can reduce suicide ideation by more than 40%, especially for LGBTQ+ youth,” Sam Brinton, The Trevor Project’s Vice President of Advocacy & Government Affairs, said during an PFLAG National video discussion on Facebook in April. 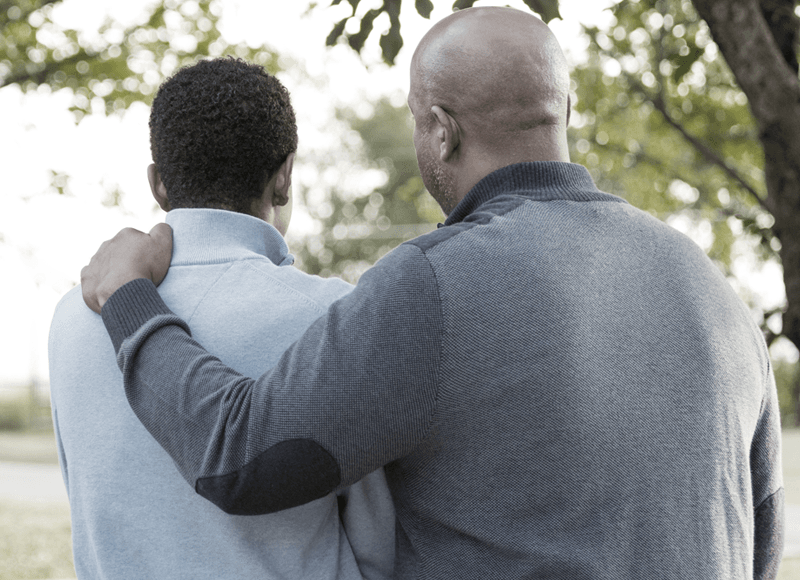 Joining Brinton for that discussion, Dr. Doreen Marshall reiterated the need to talk directly but compassionately about suicide with anyone about whom you might be concerned.

“Let’s just be clear,” Marshall, Vice President of Mission Engagement, for the American Foundation for Suicide Prevention, said. “Asking someone if they are having thoughts of suicide or someone sharing that they are having thoughts of suicide does not change the trajectory in a negative way for anyone. It doesn’t make anyone more suicidal…. In fact we have some evidence that the opposite is true. When someone is able to share their distress and that they are feeling suicidal, or someone asks, that kind of lets the person know they are not alone. They don’t have to carry this alone. This doesn’t have to be this terrible secret, and there is help out there.”

Both Brinton and Dr. Marshall emphasized the need to be ready to connect a person in distress with resources that can help—like The Trevor Project or the National Suicide Prevention Lifeline. They asserted there’s no need to treat LBGTQ+ individuals in distress differently.

“It’s the great equalizer that we can all struggle,” said Brinton.

Zero Suicide’s approach toward LGBTQ+ youth is about as basic as it gets, according to Millar: “We treat everyone like a person.”

The Trevor Project has been dedicated since 1998 to being available 24/7 to provide LGBTQ+ young people with support services during times of crisis.

Three Hollywood filmmakers launched the organization four years after their 23-minute short, Trevor, won an Academy Award. They realized their fictional story about a 13-year-old boy surviving a suicide attempt—“Everybody at school’s saying that I’m a gay; it must be showing”—reflected the real-life struggles of many LGBTQ+ youth.

“I love The Trevor Project,” said Kirsti Millar, ReDiscover’s Show-Me Zero Suicide program director. She cited the many resources available to schools, including books with LGBTQ+ characters and other educational materials: “It’s amazing.”

PFLAG started with one New York mom, Jeanne Manford, whose public support for her gay son had other LGBTQ+ people asking her to please talk with their parents.

Manford formed a support group for the parents of LGBTQ+ children in 1973. From the initial meeting she hosted and about 20 people attended, PFLAG has grown to more than 200,000 members with more than 400 chapters across the country.

The PFLAG website stresses, “Family support and acceptance is critical to the health and wellbeing of people who are lesbian, gay, bisexual, transgender and queer.”

» Ask The Question: Are You Thinking About Taking Your Own Life?
» Second Leading Cause Of Death Among Teenagers
» See The Signs: Look At The Behavior & Listen To What Is Being Said
» Suicide Deaths On The Rise Among Older Adults
» Ageism's Devastating Impact: Shortening Lives
» ReDiscover's Zero Suicide Program
» Other COMBAT-Funded Suicide Prevention Programs
Contact Us
Funding Formula
STRIVINTogether
Project Rise