“You could say for Carolyn and Sisters In Christ ‘going above and beyond’ is something they do day in and day out, especially this last year.”

The hero got caught off guard.

Carolyn Whitney attended a social-distancing gathering last week to congratulate Graceway Church for receiving a “Community Hero Award” from the Raytown Area Chamber of Commerce & Tourism Building Foundation. After Pastor Andrew Lkechukwu Adudu accepted the certification on Graceway’s behalf, Whitney was stunned when the chamber announced Sisters In Christ, the organization for which she serves as executive director, was also being named a “Community Hero.”

“I just cried,” Whitney said. “I didn’t know it was coming. They just said, ‘We have another group we want to recognize today.’”

The Chamber of Commerce & Tourism Building Foundation established the award to honor “an individual, group or business who has gone above and beyond during the pandemic of 2020 to provide community service contributions” in the Raytown area.

Sisters In Christ operates the Safe Zone hub for COMBAT’s Striving Together to Reduced Violence In Neighborhoods (STRIVIN’) initiative in Raytown. Whitney and her Safe Zone staff perform in-take evaluations of at-risk youth and their families referred to Sisters In Christ—with the referrals coming from other STRIVIN’ collaborators, including Raytown Schools. Then Sisters In Christ coordinates with other COMBAT-funded agencies in the community to provide those services the youth and family need.

“Carolyn is really committed to STRIVIN’ making a difference in Raytown,” COMBAT Director Vince Ortega said. “You could say for Carolyn and Sisters In Christ 'going above and beyond' is something they do day in and day out, especially this last year.”

COVID-19 has posed significant challenges for Sisters In Christ, which also operates three recovery houses in Kansas City for women with substance use disorders and/or mental health issues—and who may have endured being incarceration and/or homeless. Sisters In Christ “does what it does because there’s a need,” Whitney said.

And the need has increased during the pandemic. Sisters In Christ recently helped a family—mother, father, seven children—get food after the economic fallout from the health crisis left them without an income. 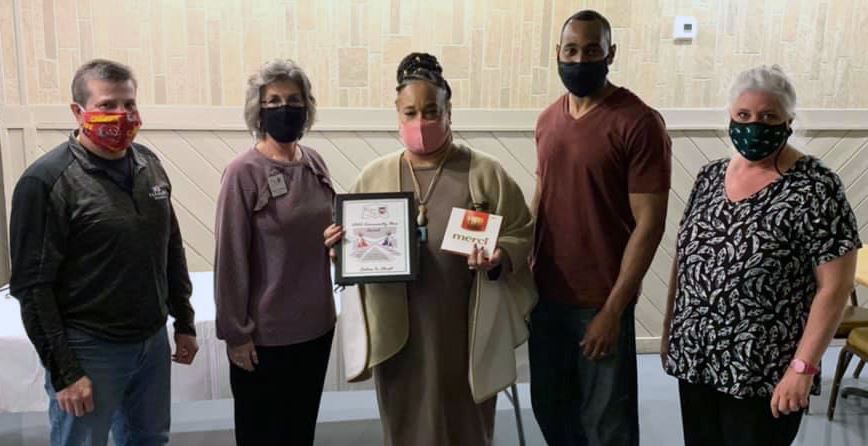 “This whole situation taxes everyone’s mental health,” Whitney said. “I just keep trying to keep everybody motivated—motivated to do normal things under these abnormal circumstances. I’ve made a mask part of my uniform and tell everyone to wear their mask.

“And I remind everybody that this too shall pass, but it’s not over yet. We need everybody to man up and be doing everything we can to protect each other.”

Ortega pointed out that Whitney’s efforts have been especially admirable as she has continued her work, despite her sister recently passing away. “She truly has been heroic,” he said.

A Reward For All The Sisters In Christ

Whitney noted that the award was “not just for me but everyone at Sisters In Christ.” And she was quick to show the Community Hero certificate to her Sisters and the women they care for at their recovery houses.

“It’s not just Miss Carolyn,” she said. “This is an award for our whole team. It made them proud, and the girls we have staying in our houses were proud, too.

“One of them started crying.”