“If we come into your neighborhood and you know we are there, doing our work, then we’ve failed. So, we’re not well known in the community as a whole. We shouldn’t be because a lot of what we do is undercover. But in the last six or seven years, we’ve gotten to be very well known within the drug community. When we come in to interrogate a dealer and say, ‘How are you doing? I am with the Jackson County Drug Task Force,’ I swear they sit there, lower their head and just go, ‘Oh, crap.’ They know who we are, and they know we’ve got them.” 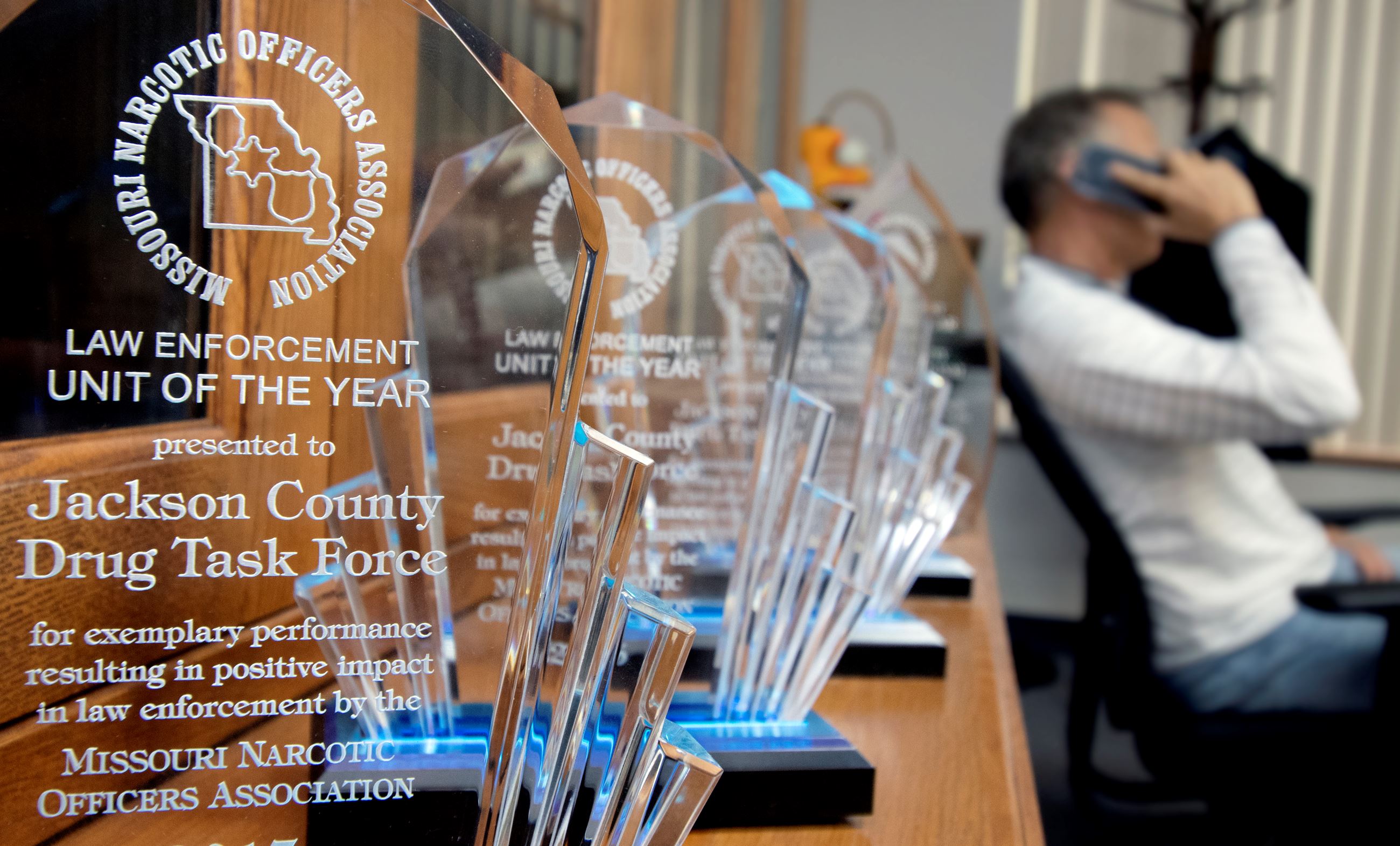 "EXEMPLARY PERFORMANCE" — Dan Cummings is proud of the work the Jackson County Drug Task Force has done during his tenure as the Officer-In-Charge, but as a former undercover officer he prefers staying out of camera range. The Task Force has also earned accolades from its law enforcement peers. The Missouri Narcotic Officers Association has named the Jackson County Drug Task Force the Law Enforcement Unit Of The Year four times in the last eight years.

A lot has changed since the Jackson County Drug Task Force was first formed in the mid-1980s.

Nearly all 21st Century drug traffickers use cell phones, and some even arrange deals via Facebook. Before those deals are finalized, “buyers” will often text photos of their cash to confirm they have the necessary funds to purchase the methamphetamine, heroin, cocaine or marijuana.

All these digital “conversations” save the Task Force’s undercover detectives time writing reports. They can use screen-captures.

The Cartels Are Here

But the sophistication level of today’s traffickers goes far beyond using modern communications. Most illicit drugs being bought and sold in Jackson County originated with what the FBI calls a Transnational Criminal Organization (TCO).

“That’s just a big fancy way of saying Mexican cartels bringing their drugs across the border,” points out Dan Cummings, Officer-In-Charge of the Jackson County Drug Task Force. “If you follow the trail of the drugs we’re confiscating, you are going to cross paths with operatives for one of these cartels doing business in Jackson County—not just in Kansas City, but in Blue Springs, Lee’s Summit, Independence.

“They are here. They control the drug trafficking in this area.”

When Cummings says “doing business” that’s exactly what he means.

The criminals running these cartels think of themselves as being CEOs—entrepreneurs, captains of industry, innovators. They manage their cash flow, supply lines, distribution centers and employees. And they’re real sticklers about punctuality. One Task Force undercover detective recently was given a stern “time-is-money” lecture when he arrived at 3:02 for a 3 o’clock drug buy.

The cartels are also concerned about quality control and customer service.

“After a buy, we’ll get follow-up calls from someone higher up in the organization,” says Cummings. “They’ll want to know if we’re satisfied with how the deal went down. Now they’re wanting to see if the front-line dealer who sold us the stuff sold as much as he told them he did and for how much money. They’re checking up on him.

“But they are genuinely concerned about us being happy with our purchase. They want our repeat business. It really is like getting a call from customer service.” 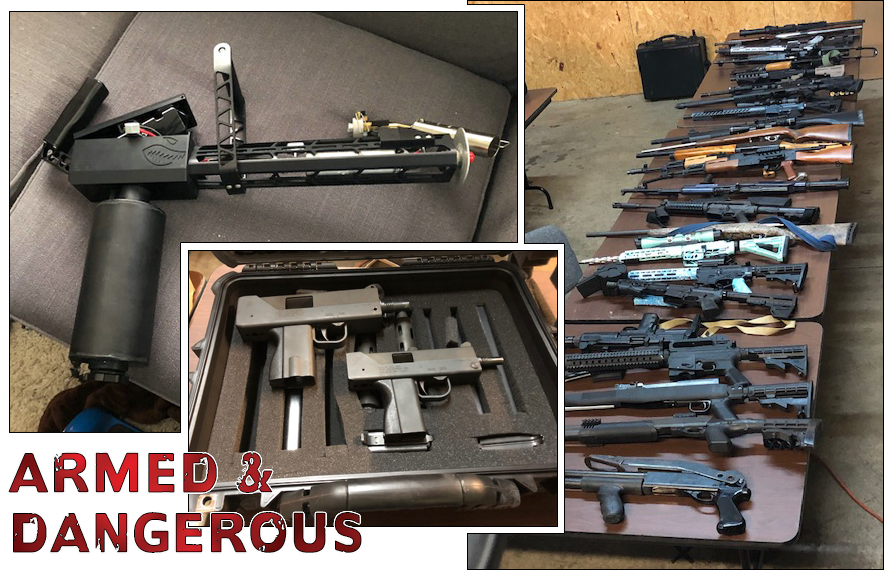 Among the weapons the Jackson County Drug Task Force has confiscated this spring include a flame thrower, fully automatic pistols and an arsenal of 46 long rifles found in one home.

Al Capone, of course, routinely referred to himself as a being “just a businessman.” The notorious Chicago gangster ordered the infamous 1929 St. Valentine’s Day Massacre and countless other murders.

A cartel CEO enforces his personnel rules with violence—extreme violence. Those rules include not using drugs, operating no “side businesses,” keeping customers satisfied, staying debt free and remaining silent if arrested. (As an extra incentive, a cartel employee working in the United States realizes breaking the rules might cost the lives of any family members back in Mexico.)

“If you are in a cartel, they might drug test you,” Cummings says. “If you test positive and you are ‘fired,’ your replacement is going to be there, taking your phone, taking your car keys, taking you out of there and taking over your business immediately. The cartel doesn’t miss a beat.”

The emergence of the cartels has changed the way the Jackson County Drug Task Force goes about conducting its business.

Throughout the 1990s and into the early 2000s, the Task Force and other local law enforcement agencies concentrated on shutting down meth labs operating inside the county. In a 1997 article, The New York Times described a typical lab in Blue Springs as a “mom-and-pop operation,” set up to support mom and pop’s own addictions—with whatever they didn’t ingest themselves then being sold.

At the peak of the meth lab crisis in the county, the Task Force might help shut down about 140 labs per year. That number is now down to less than 10.

With the local supply all but eliminated, the cartels have stepped in to continue feeding Jackson County’s meth addiction.

“Methamphetamine is still our No. 1 problem,” stresses Cummings. “We now just have a new supply line meeting the demand.”

For the Task Force, following the supply line across county lines, into other states and beyond national borders has required partnering with federal agencies on more and more in-depth investigations that might take multiple months or even years to unfold.

“Getting The Head Of The Snake”

The FBI and Drug Enforcement Administration’s (DEA) goal is to “get the head of the snake,” according to Cummings. That starts with chasing the tail, luring smaller-time dealers into convert buys and working your way up.

Cummings and his detectives are constantly “vetting candidates” among these low-level dealers, seeking out those who don’t have the close family connections south of the border and, therefore, might be more cooperative.

The result has been multiple cases involving the Task Force, Jackson County Sheriff’s Office and Kansas City Police Department—in conjunction with the FBI and DEA—being turned over to U.S. Attorneys for federal prosecution. For example, a federal grand jury in Kansas City indicted 12 residents from the KC and St. Louis areas last December for their roles in an $8.5 million conspiracy to distribute more than 1,000 pounds of methamphetamine over a two-year period.

One Jackson County Drug Task Force detective serves as a liaison to the FBI; meanwhile, a DEA agent has been assigned to the Task Force’s office—an undisclosed location. (Even the building is undercover.)

Those detectives’ sole focus is on the Task Force’s cases, so they need not worry about being pulled off that duty to work on other cases.

“Without the COMBAT funding there’d be no Task Force and each police department in Jackson County would be trying the best it can with the resources they’ve got,” Cummings says.

He was all set to settle into his retirement after 30 years carrying an Independence Police badge, when he was convinced to serve on the Task Force again in 2013 as the OIC—placed in that position as a commissioned captain for the Jackson County Sheriff’s Office. 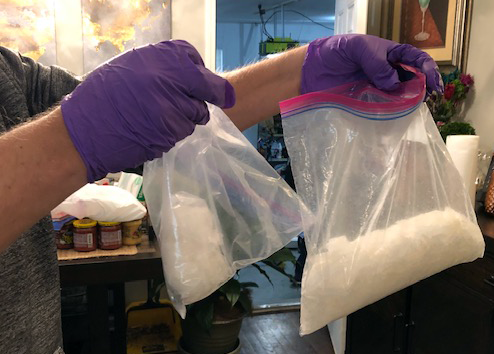 Methamphetamine the Task Force confiscated in one search earlier this spring

In his now 38 years of law enforcement experience—25 of the 38 dedicated almost entirely to drug-law enforcement—Cummings is more convinced than ever “there will always be some demand and abuse of drugs.” Yet he remains fervent about his work.

He asks, “Should we just give up fighting and trying to make drugs as limited as possible? I don’t think so.”

Cummings has only sympathy for most drug addicts—he’d rather they be given treatment than be jailed—and he believes the work the Task Force does is crucial to “preventing more addicts.”

“Last year we recovered over $16 million worth of drugs—methamphetamine being the majority of it,” he says. “We’ve had years when we’ve confiscated 150 to 200 pounds of meth. There’s 455 grams per pound and a dose of meth is just a quarter of gram. Let’s say in that 150 pounds of meth we got off the streets, there’s the quarter of a gram that might have been your daughter’s first taste of methamphetamine. What price do you put on that, when it is your daughter?

“I can’t give you a statistic for it, but I can guarantee we prevent some people—kids—from having an opportunity to try these drugs for the first time.” 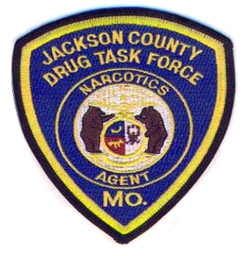 Not every police department has the resources necessary to effectively fight drug-related crimes—crimes that know no boundaries, crisscrossing city limits, county lines and state borders.

The Jackson County Drug Task Force was formed in the mid-1980s to bring together detectives from the county’s various police departments and Sheriff’s Office to pursue drug dealers across these legal jurisdictions in a coordinated, concentrated and collaborative fashion. Since being approved in 1989, COMBAT has funded the Task Force’s operations.

Those operations have expanded dramatically in the last decade—from mostly local investigations to the Task Force’s standard practice today of joining with the FBI and Drug Enforcement Administrator to develop cases that result in federal prosecutions.

This requires the Task Force to address drug crime in our neighborhoods, while also helping federal authorities try to dismantle cartels with tentacles that stretch across multiple stands and into other countries.

Detectives and other personnel assigned to the Task Force are from these Jackson County law enforcement agencies:

The chiefs from these various police departments and the Jackson County Sheriff serve as the Task Force’s Executive Team.

The Task Force’s work was been recognized repeatedly by its peers:

For some drug dealers dealing drugs is more than a business.

It's almost a religion.

The Jackson County Drug Task Force has found shrines to so-called narco saints inside drug houses. Some dealers with ties to the Mexican cartels pray for these saints to aid them in their unholy activities.

"They pray that their deals go down with no trouble," says Task Force Officer-In-Charge Dan Cummings. (He keeps the idol shown here in his office as a souvenir.)

"For a drug dealer," Cummings continues, "having your prayers answered means nobody getting killed and not getting arrested."