What does DART stand for? The Drug Abatement Response Team.

What does that mean? The Jackson County DART unit uses all legal means to shut down illegal drug activities in properties identified as having been involved in criminal activities in their neighborhoods. Some of these properties may have been repeatedly used for drug sales or drug use. COMBAT has funded DART, along with a federal grant, in Jackson County since 1991.

DART is a true collaborative effort. Keith Harrison, an investigator with the Jackson County Prosecutor’s Office, leads the DART inspection team. His teammates include a fire marshals, police officers including members of the Street Narcotics Unit, caseworkers from the Division of Family Services, water department representatives and city codes inspectors.

When asked to sum up what DART’s purpose in a single sentence, Harrison responds, “It’s a unit that actually cares about the neighborhoods in Jackson County.”

Drug Activity Shut Down At Thousands Of Properties

DART is required to balance the rights of a problem property’s owner with the rights of neighbors to live in a drug-free neighborhood. “DART can’t just shut down a house,” stresses Harrison. “The owners have rights.”

Over a quarter century, DART has shut down drug activity at thousands of properties. Since June 2016, the DART unit has inspected more than 120 properties. Forty-eight of those properties have been posted for code violations that necessitated the occupants move out immediately until those violations are addressed.

“I’ve been doing this for 19 years,” Kansas City Fire Marshall Barry Aldridge says. “I’ve been in a lot of drug houses. Some of them are actually kept up nice. A lot of them are run down with no power or running water, and they are a fire waiting to happen.”

Aldridge and Harrison recently sealed a home after finding it had no electrical service was being powered only by two generators, one inside the home and the other on the porch. Aldridge spotted more than a dozen exposed and spliced wires in the basement. Those issues plus the gasoline generators posed fire hazards.

“Those folks are really lucky we got them out of that house,” Aldridge says. “They could have been asphyxiated by the carbon monoxide from the generators, had their house burst into flames from the gasoline spilled filling those generators, or gotten themselves blown up.”

SEARCHING FOR FIRE HAZARDS — Kansas City Fire Marshal Barry Aldridge can sometimes find himself having to work in the dark during a DART inspection because the property's utilities ahve been shut off.

The DART process can be a long one that may, if problems go unresolved, end with a judge designating a home a “nuisance property.” According to Harrison, there are several steps in the process:

1) After receiving a report, police officers will conduct an investigation.

2) If that investigation merits a search warrant being issued, the police will conduct the search.

3) Following up on the search, Harrison will do background research into the property and its owner.

4) If deemed appropriate, he will then assemble the DART team.

5) The property owner and any occupants are then notified.

6) The DART team then seeks to inspect the property—inside and out—to see if it is in compliance with all codes. Any property deemed a fire hazard or to have certain code violations that render it uninhabitable are ordered to be vacated immediately.

“We’ll give them time to gather some things up, clothes and other personal belongings,” Harrison says. “But we can’t let them stay in a house that’s not safe.” 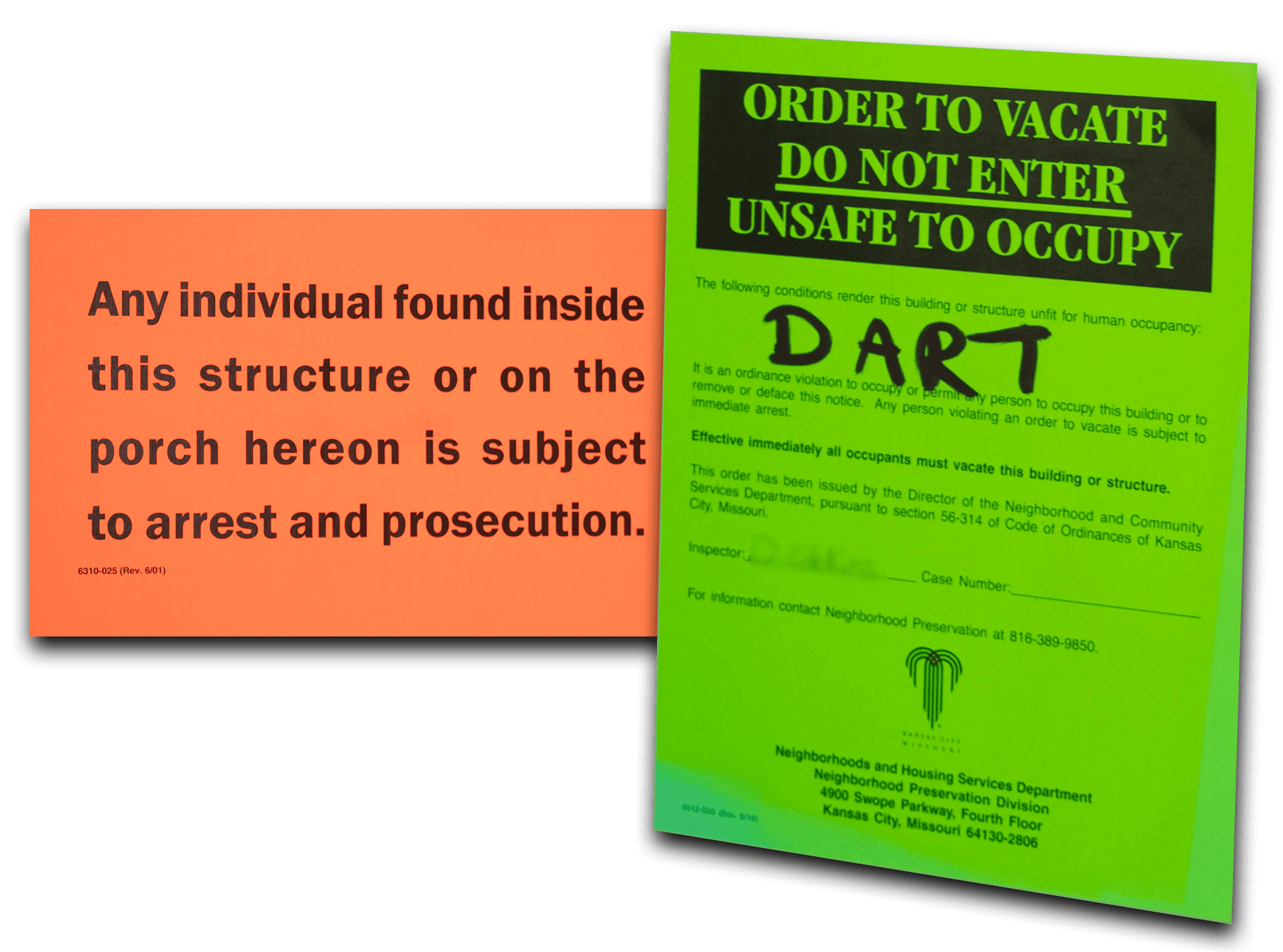 7) When severe violations require a property to be vacated, legal notices are posted that include an “ORDER TO VACATE” and warnings “any individual found inside this structure or on the porch hereon is subject to arrest and prosecution.” If less serious code violations are found, occupants will be given a warning and told what needs to be fixed to avoid a citation.

8) When DART seals a property for code violations, Harrison says an owner can go to the DART office the next business day to obtain a work access permit that allows the owner to re-enter the property during specific daytimes hours to make the necessary repairs.

9) Once repairs are finished, the DART team will re-inspect a property to determine if it is now back up to code. If the property passes the follow-up inspection, DART will issue a certificate of residency, allowing the owner or tenants to move back in. The owner will also receive a letter from the Prosecutor’s Office detailing the possible legal consequences if more incidents occur.

10) If a second violation occurs, DART may seek to have the property declared a public nuisance, which can result in the property being boarded up for up to a year.

11) In some circumstances, DART may even seek to have a court order that would have property ownership forfeited.

While DART was originally formed to deal specifically with “drug houses,” DART has been working in partnership with the No Violence Alliance (NoVA) to investigate and inspect properties associated with violent crimes.

“The procedure is still the same with these houses, where there’s been a report or multiple reports of violence occurring on the property,” says Harrison. “These are houses where the calls go above and beyond what would be considered ‘normal.’ These could be calls for disorderly conduct, assault or disturbances.”

Harrison adds, “DART is brought in to deal with problem properties that have become a big problem for their neighbors. There is a legal process that must be followed. But once DART can legally step in, our team can do a great job helping solve problems in these neighborhoods.”

"DART is brought in to deal with problem properties that have become a big problem for their neighbors. There is a legal process that must be followed. But once DART can legally step in, our team can do a great job helping solve problems in these neighborhoods." 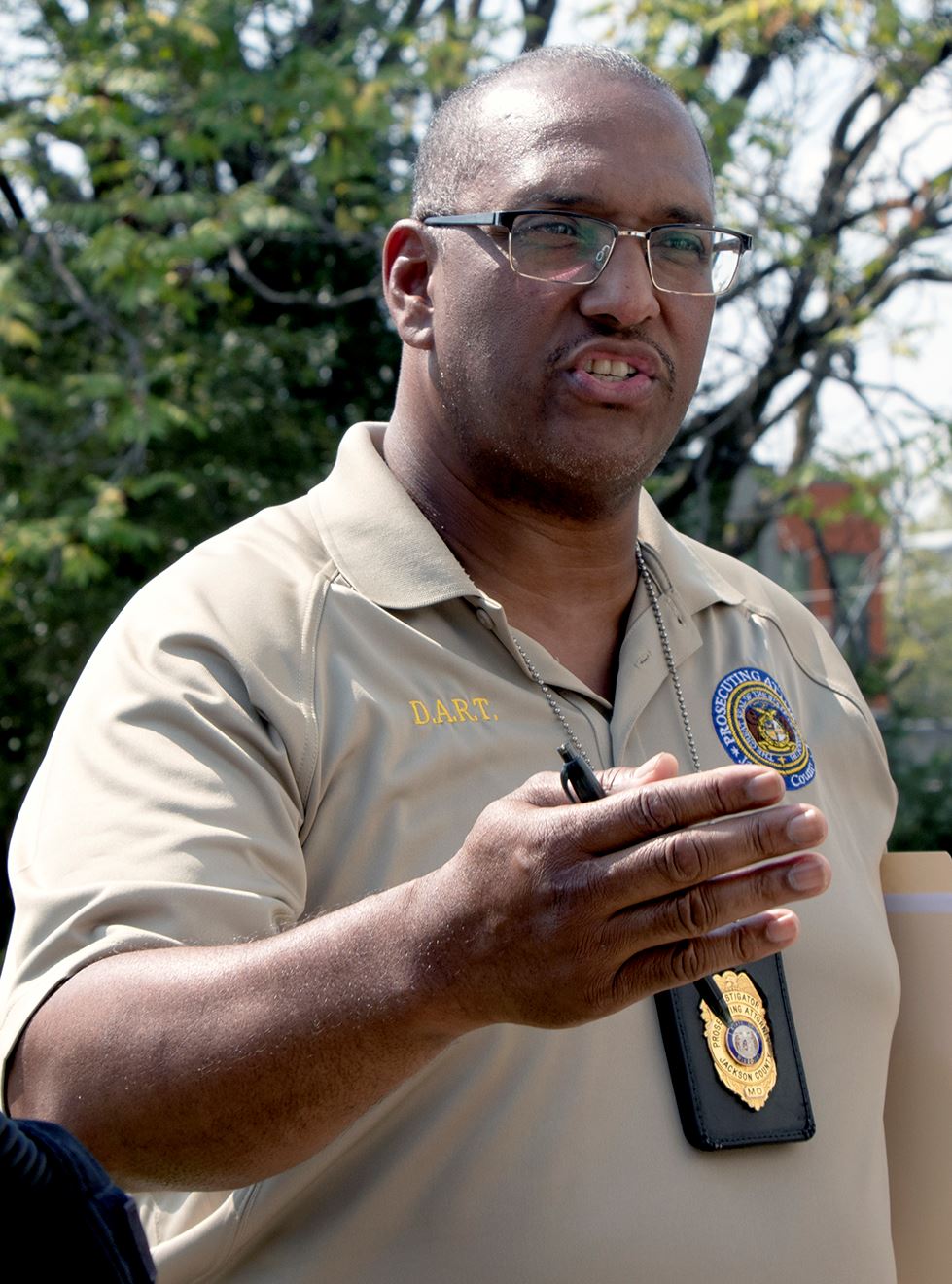